Scott discussed the possibility of hosting live meetings at our original site in Newton Highlands beginning in September. However, there were some logistical issues addressed, so the MTHA may be considering alternative venues. We discussed the feasibility of hosting the meetings at locales quite far from the greater Boston area. We spoke about the possibility of reinstating a schedule and programs similar to what we had pre-COVID. Currently, a “work in progress.”

We are planning to hold a club hunt soon. One idea was having a cookout in Braintree that day. Details forthcoming on this event, which falls on Father’s Day.

Judi Batchelder gave a recap of the fabulous hunt she sponsored for her second grade class. All the children had a great time too, and maybe some of them nowgot “hooked” on metal detecting! Lots of kids detected quite a few foreign coins that Judi had buried. Glenn, Stepper, and Bob O. attended the hunt and helped out quite a bit as well. Thank you so much for organizing such a great program, and for your support to the community, Judi!

Scott told an interesting story of how he met a schoolgirl and 25 years later she remembered his exciting discussion on gold panning.

Congrats to Bob Denault on his discovery of a stupendous set of platinum earrings!  This of course took top billing for this period. 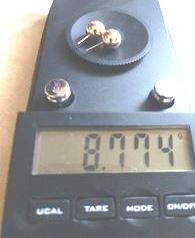